One of my latest non-guilty pleasures is funding worthy projects on kickstarter.com. Kickstarter is a funding platform for creative people ranging from writers, film makers, artists, musicians, engineers, and designers. I’ve been focusing on projects that are either geeky or local. Or, in this case, both! I found a small group of college students up the road who intend to do something that has never been done: build a robotic boat to cross the Atlantic Ocean. Check out the project at http://www.kickstarter.com/projects/601285608/scout-the-autonomous-transatlantic-boat

Scout is an nearly six foot carbon fiber boat slated to autonomously travel from Rhode Island to Spain on May 29th. Scout runs a highly efficient motor off on-board batteries charged via solar panels on the hull. The boat is completely autonomous but does include a satellite tracking system to allow the public and it’s designers to follow it’s progress. 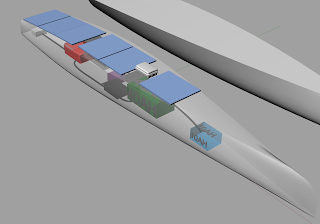 Will they make it? The odds are against them considering the harsh Atlantic environment. That said, I’m hopeful. Follow the record attempt on their website and, if you can, donate a few bucks and maybe, just maybe, be part of history.